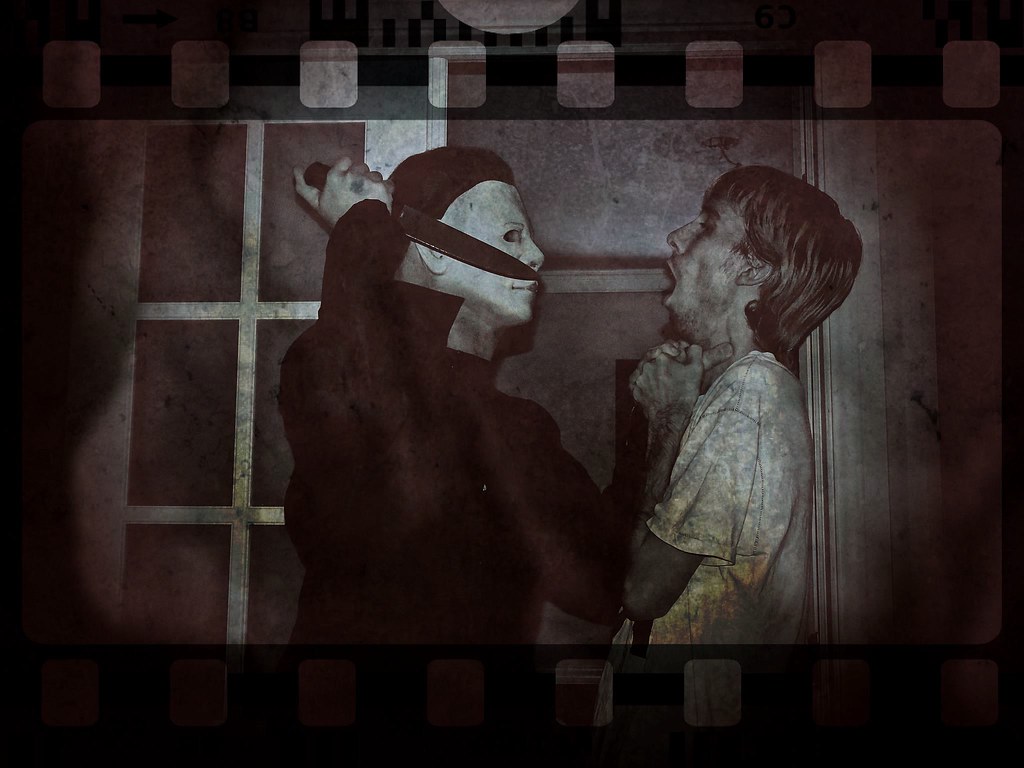 It is so on-the-nose to celebrate the Halloween season with a movie marathon of the franchise of the same name. Even more so in time to go with this week's release of "Halloween Kills" on Peacock.

As I detailed in my initial post about The Shadowplay Drive-in, I've set up my own little theatre in a room I rent out in order to enjoy the movie-going experience while theatres were closed. This tradition will continue with the new addition to the Halloween franchise along with many others.

I felt that a double-feature was in order when I'll have a few people over to pair it up with 2013's "Evil Dead" remake, which I felt was appropriate for the tone.

The other double-feature plan is to pair it with the obvious, "Halloween" (2018).

But, I would like to go ahead and document my feelings about the Halloween movies as I view them since I admit that I haven't seen all of them.

The original Halloween is the only movie in the original franchise that I've seen.

In planning these movies for my October watch list; I also looked towards Friday the 13th franchise as Jason Vorhees is among the infamous lineup of slashers. That franchise, however, has seriously lapsed setting Michael Myers ahead of the slasher game with more movies coming out. Wonder if the upcoming Halloween Ends will finally be the thing that effectively kills Myers?

But never mind all of that!

Throughout the page, you will see Amazon products. Even though everyone is streaming these movies, it's preferable to have a hardcopy of these films and other related items, since they greatly enhance the cinematic experience and include features not available through streaming services.

As horror movie genre fans and fans of the Halloween series well know, John Carpenter was involved with the first three movies. It was his vision to spearhead these series with and without Myers. He only got as far with it by one film with "Season of the Witch", before abandoning it all.

Unlike other reviews, I'm not here to tear down these movies since there are clearly very capable people behind them. I would rather spend time going through each film and analyze them on their own merits as I watch them.

As of this writing, however, and with the premiere of the new "Halloween Kills", I want to prioritize the purist timeline in these films as intended.

As I've said, this was the only one I've seen (aside from Rob zombie's movies) and multiple times. In speaking with someone who will be attending one of the double features planned, they hold this one and its first sequel as the only ones they've seen. Likely because of the absurdity introduced of Myers surviving the multiple blasts from Loomis' revolver, one follow-up sequel was clearly enough for him.

Nick Acosta is also a hardcore fan of this movie as his favorite horror film as anyone should be. It set the standard for slasher horror it still holds up today.

Jason Blum explained in the interview above that it's the simplicity of the film that makes it such a great and evergreen horror film. It's also a tradition to view this one every year to get in the mood for the fall season.

I actually watched this about three times over the week because I just love the feel of it. I can't say that I found anything new in it, it just feels like comfort food when it's on.

Own a copy of the original movie for your collection!

I strongly recommend this poster to go with your lightbox as well! If you don't have one of those, scroll down to get one!

As I said earlier, John Carpenter didn't want Halloween to focus on Michael Myers. In fact, 1978 original would have been the end of it but, money is the motivating factor that propelled the production of "Halloween II".

Despite Carpenter's involvement in that production, current developments for the David Gordon Green movies have reset the intent behind the series.

It's a widely accepted view that the series lost its way which is more convincing with Carpenter's refusal to be involved anymore. That's not to say that he wasn't still cashing the checks. Writers can always exhaust endlessly ridiculous reasons to keep Michael Myers alive which they have.

But, doesn't it matter more when the originator of that creation is involved?

Here's an interview with Carpenter and Blum about what convinced John to return.

Now, I don't have a problem with Rob Zombie's version of "Halloween". I do understand why those movies pissed off a lot of fans but it isn't as if that was something new.

With this new reset instigated by Blumhouse, the intent has been reset and the storyline has been rewritten to connect make the new trilogy the direct sequels to the original, easily shaving off 9 films from the franchise's history as well as dumping 18-years of a fatty bulky plot.

Go all the way to turn your space into a theatre with this lightbox for your posters!

I mentioned above that I hadn't seen all but the original and Rob Zombie's movies of this franchise.

In order to get all caught up, however, I decided to go ahead and binge-watch all of them which isn't so difficult given that the movies clock in at about an hour and a half to two hours.

And still, what a relief to know that I can just skip nine movies right to this one directly from the original.

Despite this, I have a bit of a problem with the connection.

At the end of the original film, Dr. Loomis shoots Myers several times with his revolver clearly hitting him and sending him falling off Stroud's balcony.

Of course, it isn't long before Loomis looks and sees that Michael has vanished, leaving us hanging for a sequel.

With this version being considered a proper sequel, we find that Michael Myers has actually been institutionalized at Smith's Grove Psychiatric Hospital for 40-years.

There's no reference to the shooting but it's being established from the beginning that Dr. Loomis wants Myers dead.

Laurie Strode says in this movie to one of the officers that he was present to apprehend Michael Myers and stopped the doctor from killing him, vaguely suggesting that he prevented him from even being shot and killed. In this case, the story is rewritten even before the original film's closing credits.

Wow, check out this awesome limited edition steel book to the direct sequel!

Separately, there's also a version on BluRay that connects this one to the original as well as the movie by itself in more accessible formats.

I think you should go ahead and load up with the poster and soundtrack while you're here!

That bit of a change to how the original ended is easily overlooked. Aside from that, we have a story that is more compelling than those in all of the other movies because of its simplicity.

Our cultural changes around sexual harassment and other things now considered taboo are welcomed in this new world in the horror movie genre. Sexual situations around teenagers are handled differently than they were in the original in that there is less of it. That helps us focus on our priorities which is the threat of Michael Myers.

We're back in scarier territory with the franchise which is what all of the other movies lacked. The entire premise connecting Laurie Strode's PTSD and history with Myers isn't wasted or filler. Also, most importantly for me, it has a similar suburbian tone ass the original. Carpenter and Blumhouse is a great collaboration for the franchise and the right gamble to make.

Here's Nick Talks Flicks giving you his take on this long-awaited return.

Go here if you want to get a more in-depth review by him if you've already seen the movie.

I'll have more to say about this movie over the weekend into next week! In the meantime, here's a trailer and some goodies you should get if you want to support this site!

First, you're gonna need a poster.

Then, you're gonna need the goddamn, fucking soundtrack!

Also, while we're here, why not also get the goddamn, fucking mask!