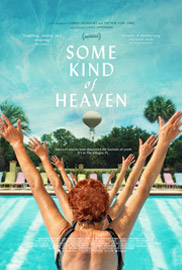 The name of the film is "Some Kind of Heaven", a documentary directed by Lance Oppenheim ("The Happiest Guy In The World"), produced by Darren Aronofsky ("Black Swan", "Mother!") with The New York Times, and starring unknowns since those featured are real everyday people.

BASIC REVIEW
From the trailer to the documentary, the view presented of The Villages as a Utopia for its aging residents is consistent. There are activities for the seniors to get involved in, plenty of restaurants in the area to go to, group gatherings, golf courses. The only way to break away from that is to focus on the lives of individual seniors who live in the area, which is where we see whether the place or most importantly, their lives are as utopian as their surroundings would suggest.

This movie was included in my double-feature movie challenge! She what I paired it with and why!

Generally, with some of the documentaries I've watched about places for seniors, I expect there to be some sort of gotcha element to catch abuses of staff, terrible living conditions, and the like. This is not that at all as the seniors living here have disposable income to be left well enough alone and be able to live very well.

it seems to me that the journey here is for those selected for this film is to either look for companionship, hold onto what they have, or start all over again as they come towards the end of their lives. Lynn Henry of "Some Kind of Heaven" courtesy of Magnolia Pictures.

WHY I RECOMMEND IT
Again, the trailer intrigued me with its high-energy presentation of the people and their surroundings where I ask myself, what's really going on there? Of course, you attach the name Darren Aronofsky to that and I know there's gonna be some underlying darkness there that I have to check out. The Soundtrack is also composed by Ari Balouzian who scored "Nightmare Code", "The Giant", and "Feels Good Man" which completely sold me and doesn't disappoint!

This documentary is Lance Oppenheim's first to earn multiple nominations and win him a Jury Award at the Philadelphia Film Festival for best documentary feature.

If you would like to support this site, get "Some Kind of Heaven" using the image below.*

*As Amazon Associates, we earn a commission from qualified purchases.