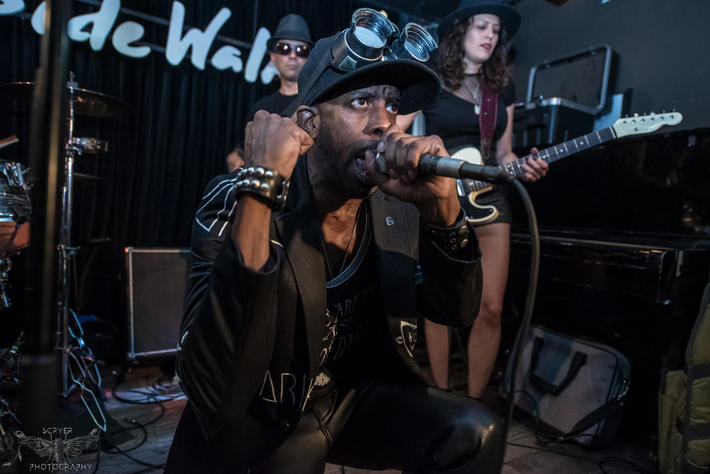 Timothy Dark's long-awaited EP is a shock to the senses and preconceived notions about what I was expecting. In fact, I'm not even sure what I was expecting until I set those expectations with repeated listens of Dark's new single, 'She Put A Spell On Me'.

Click on the image below to get this and/or sign up for a free 30-day trial for Music Unlimited!

Last year, Timothy Dark threw himself into the ring with his, 'Last Days of Dark' EP which had plenty to say about the end of days via the White House and against right-wing extremism.

ZOE DUNE: You've said that you've been writing songs for years now and pop songs among them, but in recent years have only just started to release them now that you have a band to perform them with. Clearly, I've experienced the ability to present those songs in broad and unpredictable ways. How difficult was it to do that during your live performances?

"I feel like all my songs, both Rap and Rock are better with the band. I get to extend them as long as I want and stop them short if necessary. We can jam out when the crowd gets into it and I can milk the dramatic parts for all they are worth. For example, when I perform “Another Day”, there’s a dramatic hospital scene where I reenact being in a car accident. It goes over fine with backing tracks, but the impact is so much more with the band involved."

ZOE: What drove you to even keep them in your repertoire? I can only imagine long periods of time of crippling frustration of not being able to perform the songs the way you might have envisioned them?

"I kept them in the repertoire because that’s what I do. I’m a song hoarder. I have hard drives filled with songs. Some are done, some are half done and some are just drum beats. The same goes for the “Notes” and “Voice Recorder” in my cell phone. They are both filled with lots of notes and hummed out songs. It doesn’t really bother me when I can’t perform certain songs, because I have options. I can use backing tracks or I can use part of the band. I play with just Lisa Bianco on acoustic guitar and Stephanie Linn on vocals. I’m just glad to be able to perform them when the opportunity comes along. Everything happens at the right time for a reason. Maybe they world didn’t need those tunes just yet.

ZOE: You have a music video posted from 2007 with Nellie McKay simply called 'Religion Video'. How does that fit in or how do you see that within the context of your music portfolio?

ZOE: I like how willingly you put yourself in the fight of political messaging through your music, not giving two shits about what haters have to say about it and essentially, giving a fuck that we're all pretty much fucked now.

"Thank you! I’m willing to do it, because in my opinion that’s what artists are supposed to do. We’re supposed to give a fuck, while giving a fuck. I grew up listening to artists who always said something. No matter if they were the most gangster rappers on the planet or the most pro Black Nubians on the block, they were saying something. Everybody had a message or a concept. You could listen to the music and walk away with something. They were all characters playing their part. I’m made up of little bit of every one of them, so I’m able to flip the switch to whatever channel I feel I’m needed on. When Obama was elected, I was there with a song called "ElevenFiveTwoThousandandEight”, because I felt like people needed a song that conveyed how so many of us felt on that day. We made so much progress as a nation. Then years later when the country was wounded, I was there with some new voices for the people, so that they wouldn’t feel alone. I had one voice which was very angry with the song “The Future”, and one which was still direct, but much calmer on “Unpatriotic” I can’t worry about what the haters say. If you worry about that you’ll never go anywhere or do anything. There are always going to be haters. Speak your truth.

ZOE: As you've said, you've written a lot of songs over the years that haven't been released and you're already seeing the great response and support you're getting with The Last Days of Dark and Dark Day Afternoon EPs. Should we expect a surge of releases of all of those songs, a clearance-of-the-vault kind of thing or a more meticulous trickle, playing the long game?

"That’s a great question. I don’t think the vault will ever be cleared. I’m always replacing the songs that I release with a few new ones. But do expect to see some of the caged animals released into the world along with some new born babes. I usually never know what I’m going to wear until I get up. I really never know what I’m going to do until it happens. I might create a new beat and that might spark song lyrics, or I might browse through the vault and come across something that fits the moment, or I might go to a night club and wake up with a melody in my head. It’s pretty unpredictable. But I can tell you that there is definitely a remix for the song “Performer”on the way with guest appearances from Kelsey Warren from Blak Emoji and the Boogie Down bard, Craig “Mums” Grant."

Despite the looming end times, it's good to know that Timothy Dark is playing this out!

Check out this intensive video for his 'Unpatriotic' single from last year's EP.

His video for 'The Future' is a little harder to watch but it's Timothy Dark at his best.

Lock-in to this post for more updates on Timothy Dark as we accumulate more details!