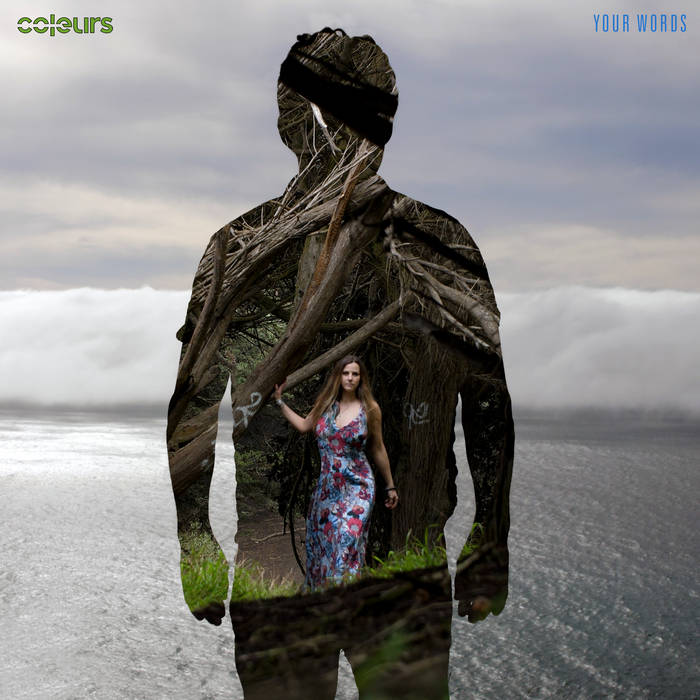 After nearly two years, Colin Wood ( AKA Coleurs) breathes fresh air into all of us with his new "Your Words" single!

"Your Words" is the first single from his upcoming full-length release expected in the coming months.

GAW AWN and watch the single via this music video which, btw, has been added to our music video playlist you can watch on YouTube!

(make sure you set it to shuffle so you can experience all of the musiv videos we've curated for a better viewing experience!)

As an Amazon Associate we earn from qualifying purchases so, support the artist and our site by getting this release through the image below!

Why not become a Prime member while you're here?

Use this link for a free 30-day trial!

Given the beauty you've see from the video and the sound of the track; matched up against Colin's earlier work (which you will be hearing momentarily as you travel further into the article); we wanted to know where his methodical ways began and so, we asked him.

ZOE DUNE: You already have your fair share of impressive singles, remixes and an EP thus far. Where and when did you get your start in producing? Also, is it safe to assume you're one of those "bedroom" producers?

"I truly started my own production and recording in my senior year of college, amongst my free time between classes.

I wrote songs by myself and with others over the years.

I learned production in high school but, I never followed through with it until after I met my friend James (Missing Words).

We wrote a lot of songs together and it sharpened that skill.

It was because of him, my other friend John (The New Division), Tyler, and Ryan (Driver405) who pushed me and were hugely supportive.

Almost everyone I can call a friend is into music, and having those people has a great impact on someone taking their leap and yes, it is completely safe to assume bedroom producer because I do most of my production on my laptop in a bedroom somewhere."

Of course, before we get the answer to that question... you've just GOT to check out the "Hunter" track Coleurs did with Driver405!

ZOE DUNE: It's great to know that there are people there, very well-established heavy-hitters in the scene to get you here.

After listening to your latest track and everything you've released, it's hard to imagine this scene without your sound!

"I feel like anyone who is making music is either trying to say what they cannot always say in conversation or it can be an extension of themselves on the other hand, we all have our own different unique voice and I'm happy to join any kind of community that supports such a thing."

We're aware of the remix you did for Trade Secrets' "Games" single and your "Hunter" track on Darknet Recordings' 'FALSE MEMORY // LOST TIME' compilation.

Both of those tracks represent an earlier phase in your music where you went for something more dance/pop heavy.

It seems that for "Game" it was that way because it was a remix and "Hunter" (as well as San Junipero) was because of Driver405's contribution?

Would that be correct?

"With Trade Secrets I originally started the remix more dancey.

I didn’t like my first draft and James who I constantly show music too suggested to make it darker.

So I decided a darker touch was needed.

In the case of Hunter, it started with the first few notes I laid down on keys and Driver405 and I built the song from there we were going for a Kavinsky-Nocturnal vibe.

San Junipero was an ode to the famous dancehall night in L.A., N.Y., and S.F.

We were both inspired by it.

I laid down bass and intro keys and Driver405 added all the goodies.

Those two songs came out quickly."

While we're here, get the single by clicking on the cover art below.

It's definitely a buy! If you don't believe us, sample the track below!

ZOE DUNE: Speaking about compilations, you are also a part of the Waves of Hope comp! Could you tell us about your involvement in that, your decision on the track you contributed and that aesthetic as well?

"I was lucky enough to meet Jim Smith (Teel) in San Francisco at a huge Turbo Drive event.

We hit it off, he mentioned during the quarantine that he was doing a fundraising effort to purchase masks. I happily donated my track to the composition, it was great to be on there with a few friends of mine as well.

I think we raised quite a bit of mask donations from what I've heard.

ZOE DUNE: How do you translate it when James (Missing Words) suggested that you make "Games" darker?

Now I'm salivating at the chance that there's a brighter and not-so-dark version of that track in your possession somewhere?

Let's get into the "technical" angles of doing that.

"Games" already sounds dark, a la Antony and the Johnsons but, your mix has a different pace and therefore, a darker tone?

Isn't it that the track the sound of the night dark enough?

"Although the track did become darker I kept some elements from the original such as the weird arp sound in the chorus, some pad elements that were taken out and replaced with a stronger melody, and new melodies were introduced, and a drum pattern in the bridge to make it hit.

When I brought it to him I had the track about 75 percent done, and then we decided it would sound much better with the darker elements.

So the original remix informed the finished product it wasn't too much of a change, maybe more additions."

ZOE DUNE: Aside from your earlier releases and remixes, your sound is more cinematic and breezy.

What kind of awareness do you maintain for that sound?

Even though it's been almost two-years since your last release and despite referring to your return single "Your Words" as a new chapter, you seem to have maintained that aesthetic.

"I have to credit that to the music I’m influenced by and the mood.

I spend a lot of time listening to instrumental music, or indie pop (M83, Slowdive, Nothing, The Chain Gang of 1974).

The one thing I can say is I just write what comes to mind.

The vibe can change or be similar depending on the mood I have when I write.

The other tracks off this upcoming full-length will have their own feeling to them."

Also, you have your fair share of instrumentals as well.

How and when do you decide to do vocals?

Vocalizing synthwave is certainly a thing and those who do it aren't afraid of much!

"To me some songs should remain without vocals, when I write if the melody stands on its own and makes me feel something I will let it breathe.

Some songs for that reason are left without vocals.

The songs that do have vocals I want them to have an impact in a different way have some sort of narrative in a sense."

ZOE DUNE: What is the narrative of "Your Words" and how does it fit into your upcoming record?

"The narrative of "Your Words" is about having someone or something and losing it.

You are trying everything possible to get it back and nothing is working.

It fits in with the record a unique way because the album is suggesting that life and all of its consistencies are finite."

ZOE DUNE: : So you say that the tracks in the new album will have different vibes and so I'm curious to know how, within the context of your subjectivity.

You know what you're doing when you arrange the tracks?

Are we looking at ups-and-downs of a flow or are you building your album around a conceptual premise?

It's definitely an ebb and flow sort of thing, I will make the tracks finish them all up and listen to them a few times to see if there is a natural flow.

To answer that question, there will be some moments of solace, some energetic tracks, and introspective tracks.

Lots of moods and flavors are what I want to achieve. While the first ep was loosely based around a concept, I feel that the lyrical content on these new tracks are all within a central theme.

ZOE DUNE: This release comes during a time that we all seem to be entering a new chapter, a reset if you will in our lives.

Could you go into what you see this chapter looks like for your Coleurs project?

"It was a very unique time to have the music come out.

The world has changed almost daily and we are still adjusting.

I think for whatever anyone is going through in result of all things that are happening, take a second for yourself, be proud of your accomplishments, and let your voice sing loud.

As for this chapter, it is the start of a new direction for this project.

My first EP 'Distance' was a test to see if I could pull of writing cohesive songs.

The next chapter of Coleurs sees the start of this vision slowly coming to fruition.

Anyone who is a songwriter will tell you this is always a journey, and that always rings true."