I thought the time-wave that traces the course of American politics had hit rock bottom in about 1994, never suspecting another Bush was waiting in the wings to send it hurtling further downward.  Now, as the Roy Moore Senatorial campaign continues to plague the Republican Party and the nation, Americans are being compelled to concede that America has a putrid, disgusting layer that lies beneath even the sordid “Trump-o-trope.”

It is the perverse region inhabited by Roy Moore.  It is the land where dominant males are permitted – even expected – to “grab them by the pussy.”  Even if those genitals are only fourteen years old. 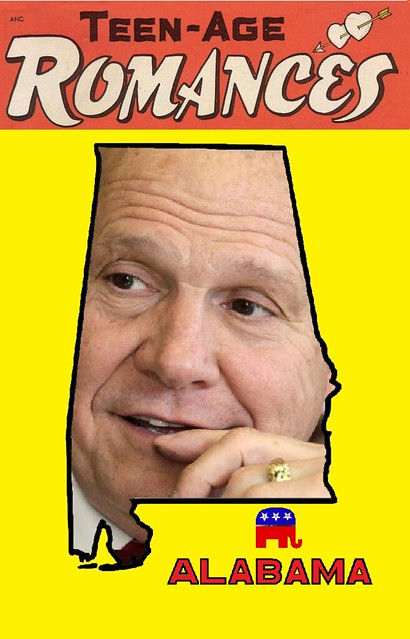 It had long been a “dirty family secret” that my great-grandfather raped his daughter – my grandmother – the night before her wedding because, he said, he’d paid to raise her and it was his right to go first.

(Kind of like being the first one to ride a horse, I guess.)  What I didn’t understand until much later in life – after I’d lost my ability to walk because of neuropathy and been compelled to take multiple medications so I wouldn’t have seizures in my sleep – was that the real story was even dirtier.

“More ‘Bang’ for your Buck“

My great-grandfather was also my grandfather.  He’d impregnated his daughter at least twice over a three-year period – and probably would have done it for the rest of his sordid life had his sons not reached the age of awareness and thrown him out of his own house.

So, I have what you might call “personal feelings” about men who think they can stick it anywhere and in anyone they like.  But, apparently, the evangelicals of Alabama don’t share those sentiments.  The latest election polls indicate 37% of them say they are more likely to vote for their favorite son because of the story of his pedophilia reported by The Washington Post.  (I’m not certain, but I suspect the phrase, “liberal media,” may have influenced what is remaining of their thought processes, at some point.)

In consideration of this disturbing percentage, please let me offer a modest proposal.  It is not the “modest proposal” of Jonathan Swift which would require the people of Alabama to cannibalize each other – although that might be one useful approach.  Rather, I would suggest that if Alabamans prefer to have a white supremacist government run by unabashed paternalists, we should let them have it.

We’ve heard a lot lately about secession in the past year.  But it always seems to be the people of some state – like California or Texas – no longer preferring to be part of an America they no longer respect or admire.  What if the rest of us no longer want to include them?  If the evangelicals’ mythical anti-Christ popped out of the cauldron of Hades and, after admitting he was, in fact, the anti-Christ, announced he was running for the Senate, would we be compelled to continue to accept their state in our Union after they elected him because The Washington Post reported he was a pedophile?

Why would we permit them to define our national identity?

So here is my proposal:  Since the last official act by Alabama was the vote by its Legislature to secede from the Union on January 11, 1861, let’s stop the compulsory inclusion we’ve forced upon them for 150 years and let them go.  With all the wall building equipment already in the area, we could easily divert the manpower and capital needed to cage them in – and keep them away from the rest of us.  And they can go merrily along, sticking anything they want anywhere they want, without making us all look like idiots.

And maybe, during the process of acquiring their true independence, they’ll recognize they live in an impoverished welfare state – ranked 47th in per capita income – that is dependent on the resources of other states to survive; one that has no right to set anyone else’s agenda, let alone that of the entire nation.

But probably not.  More likely they’ll take Swift’s advice and eat the poor.  At least the supply will be plentiful.

I’m not much for memes or online petitions.  But I’m sure some of you are.  So, let’s start the campaign today.  “If you want Roy Moore for your Senator, why not make him your President?  The Nation of Alabama deserves it!”

Views: 9
E-mail me when people leave their comments –
Follow