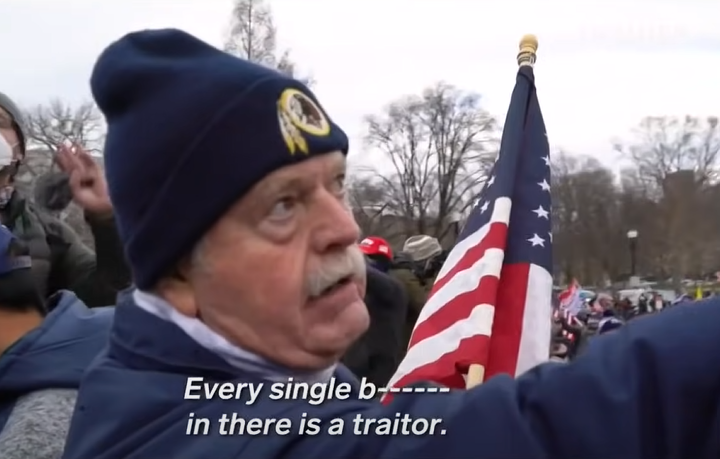 Oath Keeper leader Thomas Caldwell is among nine others indicted for seditious conspiracy against the United States government. According to evidence presented in the court filings, Caldwell was in possession of a “death list” which was already revealed by prosecutors in early July. It’s recently been learned that election workers Ruby Freeman and Wandrea “Shaye” Moss, mother and daughter, are on that list.

Ever since the insurrection against the U.S. Capitol in January of 2021, 329 rioters have pled guilty to their involvement in the attack. Despite that, most have remained defiant against the charges against them, such as Thomas Caldwell.

In an interview with Tucker Carlson earlier this year, Caldwell said that the charges against him had upended his life. He was clearly defiant in that interview, admitting that he was in Washington D.C. during the attack on the U.S. Capitol, but did not enter it. Regardless, the facts around his involvement put him as standing by in order to transport arms to those Oath Keepers who entered the building.

The Oath Keeper leader’s attorney has more recently pushed back against the “death list” saying that it is more of a “harmless doodle pad”, which was first tweeted by a POLITICO reporter.

JUST IN: Oath Keeper Thomas Caldwell has been accused by prosecutors of keeping a “death list” that included the names of election officials on it (he calls it a benign “doodle pad.”)

In a filing tonight, Caldwell revealed the names on his pad:

Even more so, the fact that Caldwell’s lawyer motioned to exclude the “harmless doodle pad” as evidence against his client, is another deliberate attempt to resist, which shows that his client is not redeemable at all.

This guy is anything but harmless. Here's a video that gives more details about who this asshole is.

Check out this book about the violent Trump insurgency to be better informed!*

*As an Amazon Associate, we earn from qualified purchases

As mentioned, Thomas Caldwell said in his Carlson interview that his life had been upended:

"You know, this whole thing has just crushed my wife and I – emotionally and financially."

Awww, poor baby! Of course, the lives of the two people mentioned on his "harmless doodle pad" haven't been affected at all! They've only been receiving death threats, MAGAts festering at their door, have a strange encounter with Kanye West's publicist who interrogated them, publicly targeted by Trump, and more recently, becoming more of a target in the hearings before the Jan 6. committee on public television.

Here is a segment detailing how their lives were really upended and not Caldwell's.

This further confirms there was a militant effort to cause harm to others, even death by those who have been indicted. Oath Keeper leader Caldwell and all others will hopefully, spend enough time in prison and lead by example, to others to think twice before trying something like this again. He is currently under supervision out of jail awaiting a trial in September.