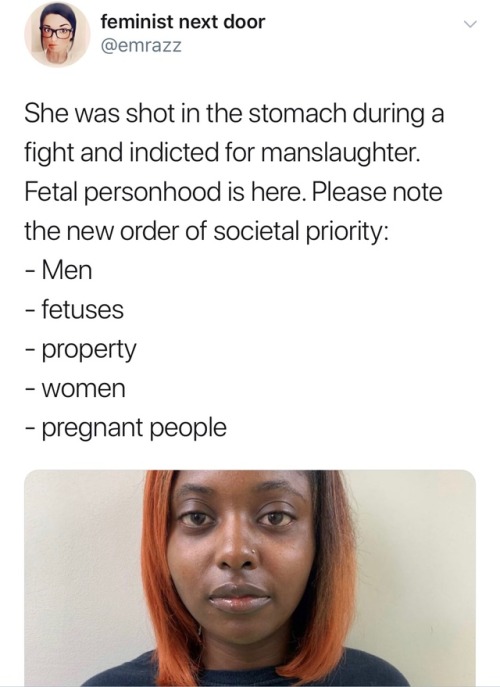 It didn't take long for the nation's most restrictive abortion ban to claim its first casualty.

Marshae Jones and Ebony Jamison got into a fight earlier this year outside a Pleasant Grove, Alabama Dollar General store.

Jones was subsequently charged with manslaughter.

Jones was charged with manslaughter?

Yes, you read that correctly.

Marshae Jones, not Ebony Jamison, was charged with manslaughter.

Due to Alabama governor Kay Ivey's ban for nearly every circumstance for which abortion might be an option, including rape and incest, it is Marshae Jones whom a Jefferson County grand jury charged for the death of her five-month-old fetus.

Charges against Jamison were dropped when a grand jury declined to indict her due to police officials’ claims Jamison acted in self-defense.

“When a five-month pregnant woman initiates a fight and attacks another person, I believe some responsibility lies with her as to any injury to her unborn child. That child is dependent on its mother to try to keep it from harm, and she shouldn’t seek out unnecessary physical altercations.”

“Marshae Jones was indicted for manslaughter for losing a pregnancy after being shot in the abdomen FIVE times. Her shooter remains free."

“Marshae Jones was indicted for homicide when someone shot her in the stomach while she was pregnant, ending her pregnancy. They said she ‘started it.’ The shooter went free. This what 2019 looks like for a pregnant woman of colour without means in a red state. This is now.”

“There’s just this very odd obsession with blaming pregnant women for anything that happens to us during our pregnancies. What’s next? Are we going to criminalize pregnant people for jogging too much, or for taking medication during their pregnancy? Where do we stop?”

In signing the most restrictive abortion ban in the nation, Gov. Ivey opened the proverbial flood gates so wide, even right-wing televangelist Pat Robertson said we’ve “gone too far.”

Under Alabama's legislation, pregnancy begins the moment of conception, and doctors who perform abortions for cases other than extreme risk to pregnant mothers’ lives will face 99 years in prison, even in cases of rape and incest.

But if you’re thinking, “Sure, that’s Alabama. It’ll never happen here,” you might want to keep reading.

Shortly after Alabama, Georgia Gov. Brian Kemp signed a similar bill that bans abortion after six weeks, a point at which doctors can usually detect a fetal heartbeat, before most women even realize they are pregnant.

Missouri has advanced a bill 24-10 to criminalize abortions at 8 weeks.

More than a dozen states this year have sought to outlaw abortion.

Louisiana, Missouri, South Carolina, and Tennessee, have advanced anti-choice bills past one chamber of its legislature.

All told, 61 anti-choice bills have been introduced across the country.

This is not just about individual states’ rights.

“Women’s rights are under attack. This relentless and cruel Republican assault on women’s health is designed to force a court battle to destroy Roe v. Wade. Democrats will be ready to defend health care and women’s reproductive freedom.”

And it’s exactly what the religious right expected to get when it threw its wholehearted support behind the mendacious thrice-married philanderer Donald J. Trump for president and his “Christian” running mate, Michael Pence.

It was Pence after all, who, as Indiana governor, ordered Purvi Patel imprisoned for 20 years for having a miscarriage, alleging she had taken an abortifacient, despite tests confirming otherwise.

This was the impetus behind the “Periods for Pence” movement, in which women tweeted or called Pence’s office to inform him when their periods started and ended so the state wouldn’t mistake their usual menstruation periods for miscarriages.

Then there is 28-year-old Melissa Ann Rowland of Utah, charged with murder after refusing to deliver her twins via Caesarean section.

One of those twins died.

Mississippi charged sixteen-year-old Rennie Gibbs with “depraved heart murder” after her baby was born with the umbilical cord wrapped around its neck, causing its death.

According to state prosecutors, Gibbs had traces of cocaine in her bloodstream.

Angela Carder was also ordered to have a C-section before she succumbed to cancer.

Both she and the baby died during the procedure.

According to the Duke University Journal of Health Politics, Policy and Law, there were 413 documented cases of women prosecuted for miscarrying or attempting abortions between the when Roe v. Wade became the law in 1973 and 2005.

Is this version of Christian “Sharia Law” what we can expect in America’s future?

Three years ago, Donald Trump admitted “There has to be some form of punishment” for women who have abortions.

So maybe he and the GOP are interested in following the Middle-Eastern kingdom’s Orwellian practice of unleashing their police on “badly behaved women.”

Exactly what Jesus would have done, right?

Although reproductive rights have always been a political football since Roe v. Wade‘s signing, and there have been prognosticators that have predicted its demise before, we are hard-pressed to think of a time in recent memory when the religious right has been so emboldened and women’s rights so threatened.

What country do we want America to be?

We know what conservatives want.

They want to “end” abortions (except for mostly white women of means).