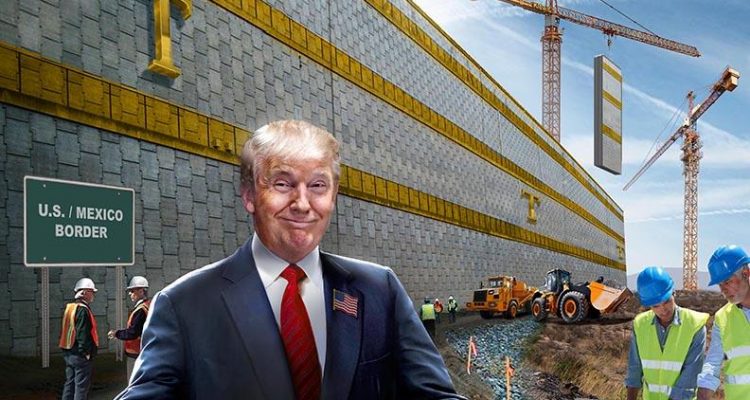 Donald Trump is a desperate man.

He is so desperate to satisfy his campaign promise to "build the wall," not only is he dangling pardons to those willing to claim "eminent domain" over private land and disregard environmental regulations to expedite billions of dollars’ in wall construction contracts.

He is also using Pentagon money for it as well.

According to a letter Defense Secretary Mark Esper sent to the chairman of the House Armed Services Committee, Adam Smith, the Pentagon is re-directing $3.6 billion for fencing along our Southern border with Mexico.

This comes after the Supreme Court in July agreed to block a lower-court ruling barring Trump from putting money toward a wall, allowing him to pay for it with $2.5 billion in Congressionally approved Pentagon funds.

Half the $3.6 million Trump is commandeering from the Defense Department is reportedly coming from domestic military construction projects in 26 states and territories; the other half is drawing from projects outside the country.

Traditionally, millions of those dollars would have been put toward military bases and defense installations.

Last week a Pentagon official told reporters this is predicted to impact about 127 military projects.

Just how desperate Trump is to fulfill his promise of 500 miles of wall fencing ahead of the 2020 presidential election is evident in “Finish the Wall!” chants at his campaign rallies.

In reality, in the 2.5 years of the Trump presidency, the U.S. Army Corps of Engineers has completed a mere 60 miles of “replacement” barrier.

No wonder Trump is nervous.

He told senior aides that failing to deliver his signature 2016 campaign promise would disappoint his supporters.

Whatever would they think of him, especially since he has failed so miserably at everything else?

That's why Trump told the Army Corps of Engineers to go ahead and “take the land” if it's in the prospective wall's way, adding, “Don’t worry, I’ll pardon you.”

“He said people expected him to build a wall, and it had to be done by the election.”

“They don’t care how much money is spent, whether landowners’ rights are violated, whether the environment is damaged, the law, the regs or even prudent business practices.”

But it's not just any old wall Trump wants.

He wants it painted black and topped with sharpened tips.

According to a piece in Raw Story:

"In June, teams of U.S. soldiers painted a one-mile section of fence in Calexico, California, at a cost of $1 million. The coating, known as 'matte black' or 'flat black,' absorbs heat, making the fence hot to the touch, more slippery and therefore tougher to climb, according to border agents."

The sharpened tips idea came directly from Trump himself after scuttling the Army Corps' original idea of metal plates at the top of the fence to thwart climbers.

The tips, Trump reportedly claimed, would instill fear in those contemplating breaching the barrier.

Painting or coating 175 miles of fencing “will add between $70 million and $133 million in cost.”

This will reduce by four to seven miles the length of fencing the Army Corps will be able to install.

Last year, Donald Trump perpetrated the longest government shutdown in U.S. history over funding for his racist border wall along the Mexican border.

He had originally demanded $5.7 billion for its construction, and even temporarily conceded to settle for less.

That is until right-wing media pundits Rush Limbaugh and Ann Coulter publicly shamed him.

Then Trump reverted back to his original $5.7 billion, refusing to budge, identifying $3.6 billion in military construction funds, $2.5 billion in Defense Department funds, and $600 million from the Treasury department’s asset forfeiture rife for the taking.

The government eventually re-opened the end of January after Congress agreed to allow Trump approximately $1.4 billion in border wall funding.

Since then, the question of how to secure funding has been in the hands of the United States Supreme Court after Trump claimed a “national emergency” necessitates immediate action.

Then the nation’s highest court handed down its decision.

Of the nine justices, the five conservatives all agreed to block a lower-court ruling barring Trump from putting money toward a wall, allowing him to pay for it with $2.5 billion in Congressionally approved Pentagon funds, explaining:

“The Government has made a sufficient showing at this stage that the plaintiffs have no cause of action to obtain review.”

With just the money originally intended from the Defense Dept., the administration states it can construct more than 100 miles of fencing.

Senate Democratic Leader Charles Schumer (D-NY) characterized the decision “deeply regrettable and nonsensical. [It] flies in the face of the will of Congress and the Congress’s exclusive power of the purse, which our founders established in the Constitution.”

“It’s a sad day when the president is cheering a decision that may allow him to steal funds from our military to pay for an ineffective and expensive wall for which he promised Mexico would foot the bill.”

Don’t forget that last point: Trump “promised” Mexico was going to pay for the wall (which was never a bright idea anyway.)

Where are all the fiscal hawks who pretend to be so concerned about government spending?

Where are all the MAGA-hatted Trumpetts swearing Trump “kept his promises”?

When it comes to healthcare, education, infrastructure, and social safety nets, we somehow always come up short-changed.

But we “found” money for a wall simply by invoking a “national emergency.”

We have a national opioid epidemic.

The government is perpetrating state-sanctioned child abuse in concentration camps at our Southern border.

Climate change is threatening to cause “climate apartheid.”

Our Secretary of State and National Security Adviser are salivating over the possibility of a war with Iran.

But a wall is a “national emergency.”

Funny how that works out.