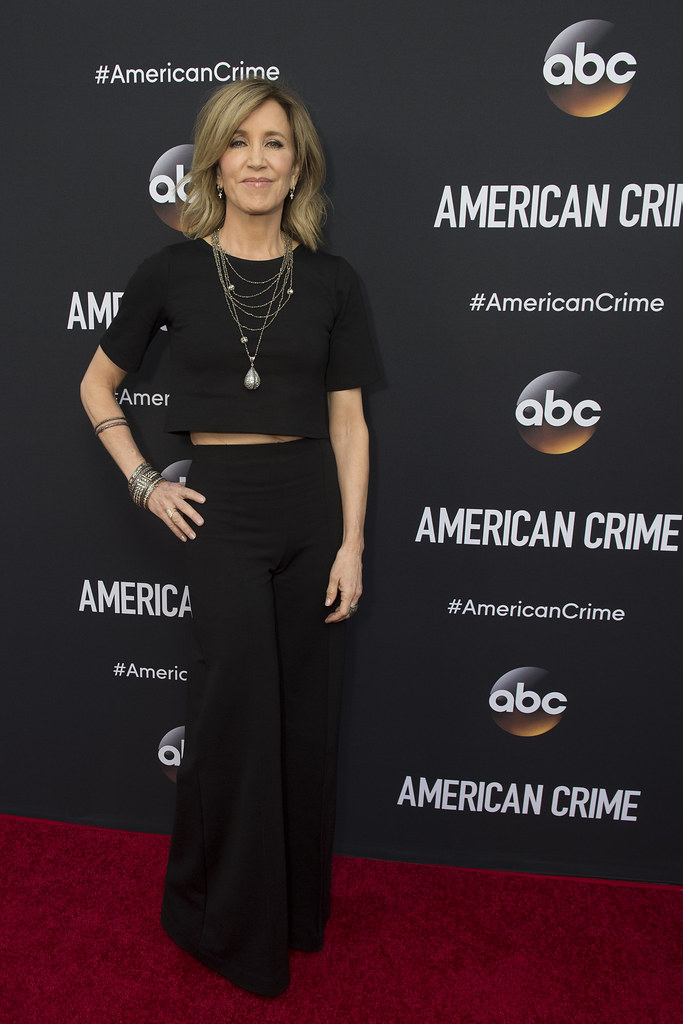 What happens when you're convicted of bribing someone $15,000 to fudge your daughter's SAT scores?

Perhaps it all depends on your net worth.

If you're a white wealthy Hollywood celebrity, you get a sympathetic writeup in People magazine.

And a prison sentence--

On Friday, actress Felicity Huffman became the first parent in the “Operation Varsity Blues” case to be sentenced for paying $15,000 for a proctor to correct her daughter’s standardized test scores.

The story broke in March when it was discovered Huffman, Lori Loughlin, and dozens of others bribed college coaches and insiders at testing centers $200,000 to $6.5 million to guarantee their children admission into some of the nation’s most elite schools, including Yale, Stanford, Georgetown, UCLA, University of Southern California, and Wake Forest University, in what FBI special agent Joseph R. Bonavolonta described as “a sham that strikes at the core of the college admissions process.”

But Huffman, Loughlin, and the other one-percenters complicit in contracting with consultant William “Rick” Singer are merely exploiting a system that has been rigged in their favor for decades.

Would they have received the same or at least a similar sentence?

When the case opened earlier this year, U.S. attorney for the District of Massachusetts, Andrew Lelling, stated in a press conference:

“These parents are a catalog of wealth and privilege. Based on the charges unsealed today, all of them knowingly conspired with Singer and others to…buy their children’s admission to elite schools through fraud.”

"In the context of this case, neither probation nor home confinement (in a large home in the Hollywood Hills with an infinity pool) would constitute meaningful punishment or deter others from committing similar crimes. Even a fine at the high end of the applicable Guidelines range would amount to little more than a rounding error for a defendant with a net worth measured in the tens of millions of dollars."

Huffman's attorneys argued they didn't feel lengthy prison time was appropriate due to this being her first offense; instead, Huffman is going to serve one year of probation, 250 hours of community service, and a pay a $20,000 fine.

Harvard Graduate School of Education faculty member and author of The Privileged Poor: How Elite Colleges Are Failing Disadvantaged Students asserts Huffman's sentence demonstrates a racial bias, and feels, because of intent, all parents complicit in the scam should serve time regardless of how much they paid to cheat.

"We are not trying to decipher, 'Oh you only paid $15,000 so you should get 15 days. Well, you paid $6.8 million, well you should get five years.' They all did the exact same thing. If this was a drug case, they would do a RICO charge so quickly because they don't care that you were the top dog or the corner boy, they would want you in jail for as long as possible."

Prosecutors alluded to the case involving Kelley Williams-Bolar, an Ohio African-American single mother sentenced in 2011 to five years in prison for using her father's address so her two daughters could attend the Copley-Fairlawn school district with better educational standards instead of the Akron school district.

But her "punishment" is nothing more than a slap on the wrist.

As outrageous as this is, it should come as no surprise given college admissions’ ongoing culture of corruption, an inevitable consequence of catering to rich donors and promoting brands instead of dedicating themselves to their supposed educational mission.

This is capitalism at its quintessential ugliest.

“If the only goal of the college admissions process in America were to create a perfect educational environment for students—not to appease wealthy donors or boost the school’s brand through athletics — the fraud wouldn’t have worked at all.”

The celebrities and otherwise wealthy perpetrators of this scandal were only doing what the system allowed them to do, and others had done before them.

“The underlying logic of the scheme was this: Wealthy parents wanted to get their kids into elite colleges, but their kids had so-so grades and test scores that wouldn’t qualify them for admission through the usual process. Happily for them, college admissions isn’t a level playing field.”

Since the story broke, there have been comparisons to it and Affirmative Action.

That could not be anymore a false equivalency.

While it is true the college cheating scandal and Affirmative Action secure seats in university classrooms to some students, excluding others, Affirmative Action provides educational opportunities for minorities who have not benefited from the level of economic, social, and–yes, white–privilege opulent students traditionally have.

While it may be a valid claim that Affirmative Action favors certain students over others, we must consider the institutional economic and racial disparities that have systematically disenfranchised minorities for hundreds of years.

“This scandal exposed the fact that there is a misplaced emphasis on so-called affirmative action inequities, rather than privilege. That is the big travesty of college admission. People of means are able to tilt the system in their favor.”

Providing an opportunity to acquire an education is hardly the worst thing we can do–except when it is lumped into the same profit-driven combine as healthcare, pharmaceuticals, media, and banking.

Education should be free.

“An educated citizenry is a vital requisite for our survival as a free people.”

For every dollar we spend on educating someone, we receive a seven-fold return on investment.

But in America, everything has to first be siphoned through Wall Street and Washington lobbyists so the money stays at the top.

This cheating scandal is proof positive of the rot within our capitalist system.

And that needs to change.