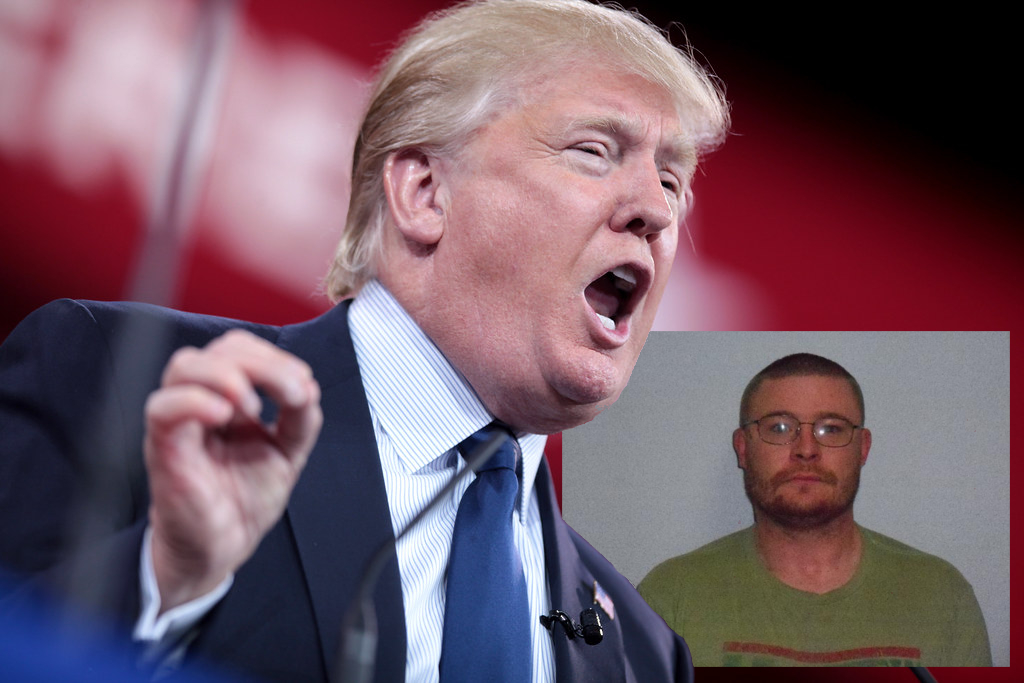 By now it has become almost common knowledge that Donald Trump’s rhetoric is providing his supporters all the permission they need to verbally and physically assault--sometimes lethally--those the president has maligned.

The most common targets have been immigrants (both documented and undocumented), the press, Hispanics and Latinos, Africans, African-Americans, Caribbean-Americans, Muslims, asylum seekers, Democrats, and anyone else Trump feels has not deigned to kiss his...er...ring.

Last week showed us another disgusting example when Curt James Brockway admitted he was acting on Trump’s encouragement after being charged with a felony for assaulting a 13-year-old boy after the boy failed to remove his hat during the National Anthem.

According to The Missoulian, the incident occurred August 3 at the Mineral County Fair in Montana, and Brockway, a U.S. Army veteran, convicted in 2010 for assault with a weapon for which he received a 10-year suspended sentence, “choke-slammed a 13-year-old, fracturing his skull.”

"His commander in chief is telling people that if they [NFL players] kneel, they should be fired, or if they burn a flag, they should be punished. He certainly didn't understand it was a crime."

According to Mineral County District Court charging documents, Brockway informed police deputy Micah Allard the National Anthem began before the rodeo got underway when he noticed a teenager wearing a hat. Brockway reportedly asked the youth to remove the hat, and the boy replied "F*%! you."

This resulted in Brockway grabbing the boy by the throat, lifting him, and slamming him to the ground.

Brockway apparently defended his action as fair-goers closed in on him.

One of those fair-goers, Taylor Hennick, told The Missoulian:

"He [Brockway] said [the boy] was disrespecting the national anthem so he had every right to do that."

The boy Brockway attacked suffered a concussion and fractured skull.

Although Lance Jasper concurs Brockway acted on Trump’s urging, he also cited the traumatic brain injury to his frontal lobe Brockway sustained in a car accident while on active military duty in 2000 for which he was honorably discharged.

"Obviously he [Brockway] owes a big portion of accountability for what took place, but it's certain that there was other things at work here that definitely contributed."

This is a perfect example of what can happen when impressionable, in this case, unstable, people receive messages from authority figures, like the President of the United States.

Brockway was already mentally unhinged. All it took for him to snap was some inflammatory speech from the most visible and powerful person in the world.

Although he is ultimately responsible for his actions and was arraigned on Wednesday, the president bears some culpability even though he continues to insist he does not.

To date, Donald Trump’s name has been invoked in 36 criminal cases involving violence, threats, or assault.

“In nine cases, perpetrators hailed Trump in the midst or immediate aftermath of physically attacking innocent victims. In another 10 cases, perpetrators cheered or defended Trump while taunting or threatening others. And in another 10 cases, Trump and his rhetoric were cited in court to explain a defendant's violent or threatening behavior. Seven cases involved violent or threatening acts perpetrated in defiance of Trump, with many of them targeting Trump's allies in Congress. But the vast majority of the cases--29 of the 36-- reflect someone echoing presidential rhetoric, not protesting it.”

And for those who will automatically blurt out “What about Obama?” they should know not a single criminal case filed in federal or state courts refer to violence or threats Obama’s name.