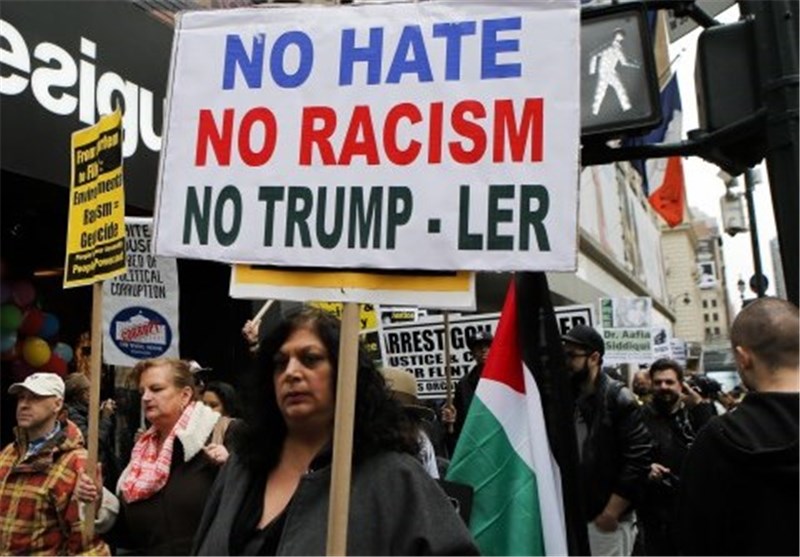 Donald Trump has been called a racist, a rapist, a misogynist, sexist, petty, petulant, and sophomoric.

Nearly three years into his presidency, he has done nothing to dispel these labels.

On the contrary, he reinforces them day after day, uttering yet another inappropriate comment that sends the media scrambling away from the daily damage he inflicts on the environment, health care, human rights, reproductive health, civil liberties, government institutions, national security, the rule of law, and common decency.

Well, he did it again.

Amid the scandal swirling around convicted serial sexual assaulter Jeffrey Epstein and his personal connection to Trump, the president either intentionally or otherwise handed us another thing to talk about this weekend when he suggested four freshman Democratic congresswomen of color “go back and help fix” the countries they came from.

"So interesting to see 'Progressive' Democrat Congresswomen, who originally came from countries whose governments are a complete and total catastrophe, the worst, most corrupt and inept anywhere in the world (if they even have a functioning government at all), now loudly and viciously telling the people of the United States, the greatest and most powerful Nation on earth, how our government is to be run. Why don’t they go back and help fix the totally broken and crime infested places from which they came. [sic] Then come back and show us how it is done. These places need your help badly, you can’t leave fast enough. I’m sure that Nancy Pelosi would be very happy to quickly work out free travel arrangements!"

"Mr. President, the country I 'come from,' & the country we all swear to, is the United States. But given how you’ve destroyed our border with inhumane camps, all at a benefit to you & the corps who profit off them, you are absolutely right about the corruption laid at your feet. You are angry because you don’t believe in an America where I represent New York 14, where the good people of Minnesota elected @IlhanMN, where @RashidaTlaib fights for Michigan families, where @AyannaPressley champions little girls in Boston. You are angry because you can’t conceive of an America that includes us. You rely on a frightened America for your plunder. You won’t accept a nation that sees healthcare as a right or education as a #1 priority, especially where we’re the ones fighting for it. Yet here we are. But you know what’s the rub of it all, Mr. President? On top of not accepting an America that elected us, you cannot accept that we don’t fear you,either. You can’t accept that we will call your bluff & offer a positive vision for this country. And that’s what makes you seethe."

"Mr. President, As Members of Congress, the only country we swear an oath to is the United States. Which is why we are fighting to protect it from the worst, most corrupt and inept president we have ever seen.You are stoking white nationalism bc you are angry that people like us are serving in Congress and fighting against your hate-filled agenda."

"When @realDonaldTrump tells four American Congresswomen to go back to their countries, he reaffirms his plan to 'Make America Great Again' has always been about making America white again. I reject @realDonaldTrump’s xenophobic comments meant to divide our nation. Rather than attack Members of Congress, he should work with us for humane immigration policy that reflects American values. Stop the raids - #FamiliesBelongTogether!"

Rep. Pressley was born in Ohio.

Only Rep. Omar is not native-born, having immigrated to the United States from Somalia at age 12 and becoming a naturalized American citizen.

Trump’s attacks are not benign, and they are not merely further evidence of his racism and sexism.

They are messages to the racists in his base who need little provocation to incite violence.

Being the president of the United States, his words matter more than the rest of ours.

Even if deplorable, his rhetoric is effective in conveying all the implicit permission those already inclined to take matters into their own proverbial hands might need to follow in the footsteps of neo-Nazi U.S. Coast Guard lieutenant, Christopher Paul Hasson, who earlier this year compiled a spreadsheet of targeted current and former lawmakers, including Reps. Omar and Ocasio-Cortez.

Those already inclined to take matters into their own hands might follow in the footsteps of Cesar Sayoc, who mailed pipe bombs to Barack Obama, Hillary Clinton, Rep. Maxine Waters, Senators Cory Booker and Kamala Harris, CNN, comedian Bill Maher, and six other prominent Trump critics.

Recently, Fox News commentator Jeanine Pirro claimed Rep. Omar, one of the first Muslim women elected to Congress, wears a hijab because of her “adherence to Sharia law.”

Omar has been cited as “proof” the Democratic party is anti-Semitic.

Donald Trump built his campaign, and now his presidency, on those “rapists,” “murderers,” and “animals” “invading” our country from the Southern border.

He accused Haitian immigrants residing here under temporary protected status as having AIDS.

He claimed 40,000 Nigerians would never “go back to their huts” after coming here.

He accused Guatemala, Honduras, and El Salvador–the countries he called “shitholes“–of “arranging” the migrant caravans of “illegals” coming to get us.

It’s also no secret what he thinks of the media, which he smears with the label “fake news” and “enemy of the people” should it deign to report anything negative about what his administration is up to.

Trump refers to his political opponents as “globalists” who “want the globe to do well, frankly, not caring about our country.”

Those “globalists,” according to Trump, support “caravans” of “unknown Middle Easterners” en route from Central America to wreak havoc on American sovereignty.

When it comes to elections, says Trump, the “globalists” depend on millions of non-American “illegals” showing up in droves to vote.

He has ramped up his attacks on Socialism.

He told “second amendment people” they might be able to take care of Hillary Clinton.

Brenton Tarrant, the white supremacist who live-streamed his slaughter of Muslims in a Christchurch, New Zealand mosque earlier this year, described himself as a “regular white man from a regular family” who “decided to take a stand to ensure a future for my people,” adding he used to be “a communist, then an anarchist and finally a libertarian before coming to be an eco-fascist.”

There are more out there, and Trump’s stochastic terrorism just gave them more ammunition.

“One group denies the humanity of the other group. Members of it are equated with animals, vermin, insects or diseases. Dehumanization overcomes the normal human revulsion against murder. At this stage, hate propaganda in print and on hate radios is used to vilify the victim group. The majority group is taught to regard the other group as less than human, and even alien to their society. They are indoctrinated to believe that ‘We are better off without them.’ The powerless group can become so depersonalized that they are actually given numbers rather than names, as Jews were in the death camps. They are equated with filth, impurity, and immorality. Hate speech fills the propaganda of official radio, newspapers, and speeches.”

Remember what happened to abortion doctor George Tiller back in 2009 after former Fox News host Bill O’Reilly repeatedly (29 times) on his show branded him “Tiller the Baby Killer,” equated him to Mao, Hitler, Stalin, al-Qaida, and NAMBLA; accused him of “operating a death mill;” and claimed he was “executing babies about to be born.”

An avid O’Reilly fan named Scott Roeder waited in the pews of Tiller’s church one Sunday morning until Tiller finished his duty as an usher, then walked into the church foyer, pressed a gun against Tiller’s forehead, and assassinated him.