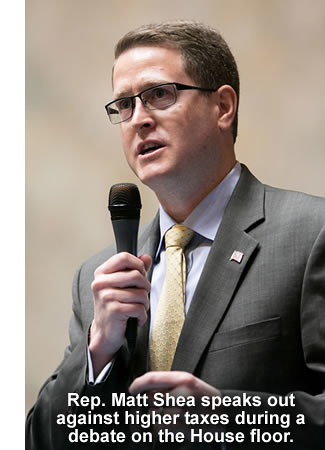 The current occupant of 1600 Pennsylvania Ave. is a mendacious thrice-married philanderer and malignant narcissist blatantly promoting a proto-fascist agenda.

His vice president is no better.

As Indiana governor, Mike Pence ordered Purvi Patel imprisoned for 20 years for having a miscarriage, alleging she had taken an abortifacient, despite tests confirming she did not have any drugs in her system.

This was the impetus behind the “Periods for Pence,” movement, in which women tweeted or called Pence’s office to inform him when their periods started and ended so the state wouldn’t mistake their usual menstruation periods for miscarriages.

These are the very people to whom the conservative "Christian" right has hitched its wagon.

And because they have secured the White House's stamp of approval, powerful end-times crusaders are preparing for the long-awaited apocalypse.

Last week, The Guardian revealed that Washington state Rep. Matt Shea created videos supporting Team Rugged, “a Christian organization that strongly believes in building manly character and the capability to stand in adversity in young men,” offering young men training in “biblical warfare,”  including knife use, firearms, and lessons based on the teachings of Georgia-based neo-Confederate pastor John Weaver, whom the Southern Poverty Law Center (SPLC) cites is a “leading proponent for training Christians for armed battle.”

Shea appeared alongside Team Rugged members at a religious enclave in eastern Washington, and even paid the group's founder money from his campaign fund in 2018.

In 2016, Shea received an email from Patrick Caughran, the self-described Team Rugged founder, who asked Shea to publish a link to the group’s Facebook page, and put him in touch with “John Jacob Schmidt,” the alias of Shea associate Jack Robertson, a rightwing podcast host who advocates conservatives relocate to the “American Redoubt” in eastern Washington, Idaho, and Montana.

“Everything about it is both politically incorrect and what would be considered shocking truth to most modern Christians. There will be scenarios where every participant will have to fight against one of the most barbaric enemies that are invading our country, Muslims terrorists [sic].”

The training regimen Team Rugged, according to Caughran:

“Biblical teaching (some taken from pastor John Weaver’s works) on biblical warfare, the responsibilities, regulations, principles and mindset. So that our young men will be better prepared to fight against physical enemies, and to do so, God’s way and with His blessing.”

The training is intended to “show them how to work better as a team, both in achieving physically demanding tasks and on the battlefield. Those who attend will learn combatives, the use of a knife in defense, close quarters shooting with rifle and pistol and how to work effectively in teams of 2, 3 and 4.”

Shea responded to Caughran's email from an address associated with his law practice that the requested Facebook link was scheduled to post the following day.

Last year, at a gathering at a remote religious compound in Northeastern Washington, Rep. Shea and several associates spoke to an audience about conspiracy theories and separatist ideology, imploring members to arm themselves for an impending civil war.

Shea's associate, Jack Robertson, delivered his own speech, in which he asked:

“Of course, you all know that you should have an AR-15 and a thousand rounds of ammo, right? Because Antifa is kicking up and getting ready to defend, right?”

Shea has proposed the reason America is no longer a “beacon of Christianity” is “because of compromise. And it’s not knowing that the communists are training, they’re planning, they’re organizing and they are lying in wait. If you don’t believe that, then you don’t understand what is really wrong with America.”

Although this type of apocalyptic rhetoric is far from new, its prevalence seems to be increasing since we have an administration courting its adherents, providing them all the permission they need to spread intolerance, fear, conspiracy theories, and hate posing as Christianity.

Trump's own Secretary of State, Mike Pompeo, claimed earlier this year he thinks it is "possible" God sent Donald Trump to save Israel from Iran.

With that kind of talk, no wonder the crazies feel it's finally their moment.