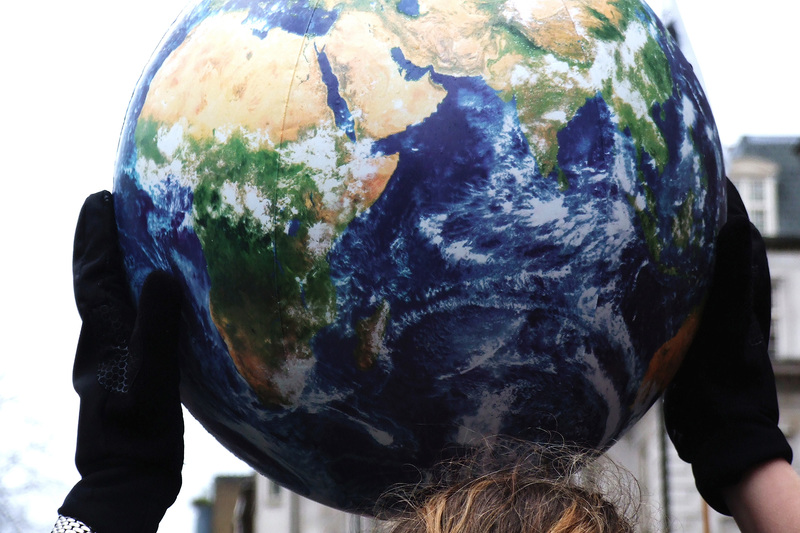 Despite the part about him breaking federal law in altering a National Weather Service map, Donald Trump was probably pretty relieved last week as Hurricane Dorian inched closer to the United States.

It meant the mainstream media was going to fixate almost exclusively on the hurricane, 24/7, and less on his criminal enterprise.

Yet amid all Dorian's coverage, there is one term that's kryptonite to the American for-profit media, despite its responsibility for Dorian's intensity: climate change.

According to the media monitoring site TVEyes, since August 29, the three leading all-news channels mentioned "hurricane" more than 1,600 times.

The Nation and the Columbia Journalism Review noted in a jointly published article earlier this year:

"Judging by the climate coverage to date, most of the US news media still don’t get grasp the seriousness of this issue. This journalistic failure has given rise to a calamitous public ignorance, which in turn has enabled politicians and corporations to avoid action."

Media Matters recently reported the five major Sunday morning political television shows featured "only a combined total of two segments that included at least a substantial reference to climate change" after a record-breaking heatwave afflicted much of the Midwest and East Coast this summer, killing at least six people.

Fewer than one-half of the 50 largest newspapers in the country covered the Intergovernmental Panel on Climate Change (IPCC)'s dire report predicting a window of only 10 to 12 years to halt coal consumption and slash carbon dioxide emissions to prevent mass food shortages, climate-induced homelessness, mass migrations, failing infrastructure, and more catastrophic weather that could climb into the billions annually.

Just one example is the Great Lakes.

Yet read how the Wall Street Journal recently reported it:

"The high water levels are the result of several years of above-average rains and snowfall, including record amounts for the past 12 months, according to federal data."

Is that a grotesque enough evasion?

Who'd a thunk it?

"We are undoubtedly observing the effects of a warming climate in the Great Lakes. We are at the beginning of what’s going to be a number of decades where the climate is going to be changing very fast. During that time, we will have many unexpected weather events, and we need to learn from these events to better prepare for the future.”

"Over the last two centuries, the Great Lakes have been significantly impacted by human activity, and climate change is now adding more challenges and another layer of stress."

And this is only one example in one area of the country.

In 2017, Academic Jennifer Good analyzed eight major TV networks' hurricane coverage during the height of hurricane season for two weeks, concluding about 60% of the stories included the word "Trump;" only about 5% mentioned climate change.

According to media research group Media Matters, networks ABC and NBC failed to incorporate climate change into their news coverage of Hurricane Harvey, which caused the heaviest rainfall the continental U.S. ever recorded. Then Hurricane Irma hit, breaking more records. Still no mention of climate change.

As The Guardian reported:

"Coverage was even worse of Hurricane Maria, the third hurricane to make landfall in the US this year. Not only did media outlets largely fail to cover the climate connection; in many cases, they largely failed to cover the hurricane itself."

MIT Media Lab researchers found in major print and online media outlets Maria got about a third as many mentions as Harvey and Irma.

This only provides ammunition to media explicitly pandering to the right, like Fox News, in its denial of the science behind anthropogenic climate change.

It also enables the fossil fuel industry's billionaire backers like Charles Koch and his late brother David, as well as the entire Republican party in minimizing climate change's exigency.

A Public Citizen report titled “Carbon Omission: How the U.S. Media Underreported Climate Change in 2017” analyzes more than a dozen prominent newspapers and television networks’ 2017 weather coverage, from the New York Times to the Denver Post to the Fox News Network.

“Given the gravity and urgency of the climate crisis, as well as a surfeit of relevant, newsworthy developments, one would expect U.S. media to report on climate and clean energy issues daily.”

There was no shortage of coverage of major weather events, but the link those events had to climate change got little to no mention.

“The proportion of pieces that mentioned climate change in climate-relevant contexts was decidely low.”

In what is being labeled “climate apartheid,” the United Nations Special Rapporteur on Extreme Poverty and Human Rights, Philip Alston, warns climate change’s impacts are likely to undermine democracy and the rule of law in addition to basic rights to life, water, food, and housing for hundreds of millions.

The “climate apartheid” scenario will occur when “The wealthy pay to escape overheating, hunger, and conflict while the rest of the world is left to suffer.”

A recent, example happened last fall in California, where the historic and deadly Camp and Woolsey fires destroyed more than 100,000 acres and took at least 44 lives.

Last May, NBC published an article explaining how AIG insurance offers wealthy homeowners a “Wildfire Protection Unit” comprised of providing homeowners with flame retardants and AIG employees certified through state or local authorities who respond to fires and map homes in real time as wildfires approach.

This includes the profit motive in our corporate media.

"At precisely the moment when we need more reporters covering the healthcare crisis, the climate emergency, and economic inequality, we have television pundits paid tens of millions of dollars to pontificate about frivolous political gossip, as local news outlets are eviscerated."

"Corporate media organizations sponsored by fossil fuel industry ads may gladly provide a platform for guests who insist that our current oligarchic economy is just great, but as studies show, the same outlets often downplay or omit coverage of the climate crisis that those advertisers are helping create."