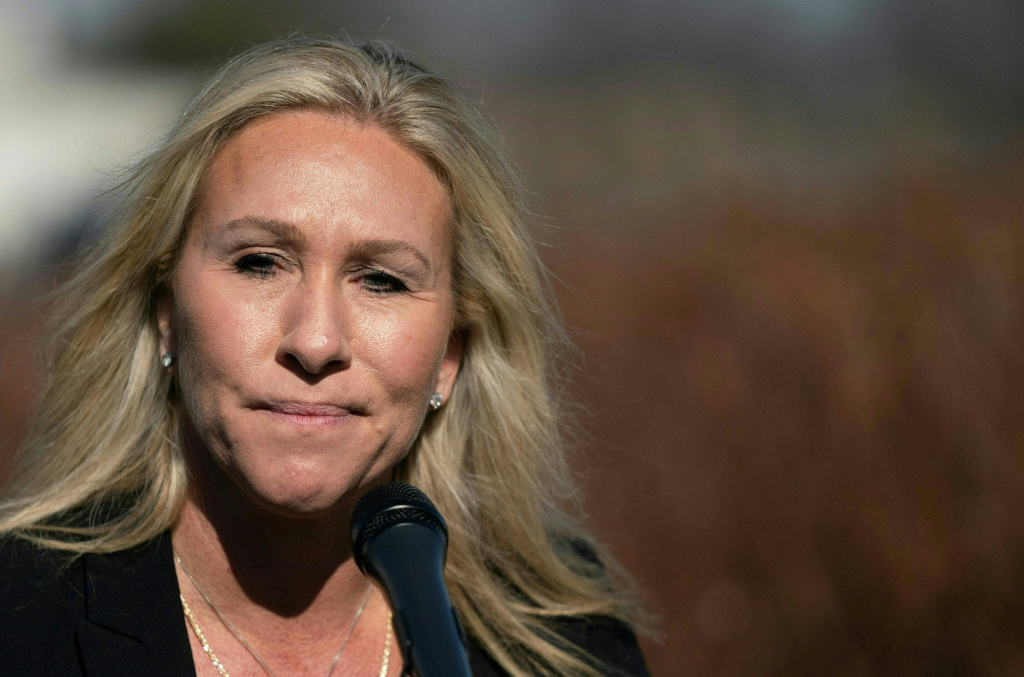 Their hypocrisy on this is also obvious when they glaze over the many people they've killed with their policies.
They'll even volunteer the deaths of their own constituents.
Especially as reports of Covid infections ramp up.

"But, I've talked to local hospitals here in my district and here in my state. Yes, that the waiting rooms get full but guess what; the waiting rooms are full of all kinds of things, not just Covid. Some things are car accidents, trauma, other illnesses, cancer, and so forth. So, they're seeing about 30 percent of those being Covid cases. So, while the news tries to tell us the hospitals are slam-packed with Covid, that's just not the case. Everyone needs to get back down to common sense and remember that, you know, we're human. We can't live forever and we're going to catch all kinds of diseases, and illnesses and other viruses, and we get hurt sometimes."

One of her jobs as a Trump loyalist is to repeat the same rhetoric he promotes.
Such as to attack and dismiss the media, and their reporting as fake news.
Convincing their followers they are being lied to about Covid infections.
In this context, she's narrowing the point to accept the harsh reality that we're all going to die of something.
Only an imbecile would think otherwise.
More importantly, to accept it.

What we've experienced over the past year has been traumatic.
We learned how infectious the Coronavirus is.
It's overwhelmed hospitals, the federal government's stockpile of medical supplies, and morgues.
And those are facts that she's left out.
Especially in her claim that hospitalized Covid cases are only at 30 percent.
By doing so, Marjorie Taylor Green dismisses that that percentage could increase.

She's putting more people at risk by encouraging them to not get vaccinated.
Thus, she's increasing the risk of the further spread of a potentially lethal virus.
Of course, if Trump were encouraging vaccination, her message would be different.
But since Biden is President and a Democrat promoting it, it's the only reason she needs to put more lives at risk.
This is in true form for her party.
You can support this service by purchasing Amazon products here.

If that doesn't convince you, here's video footage of her in Alabama working up a bunch of Republican voters to welcome one of Joe Biden's "police state friends" with a loaded gun.

A viewer of mine secretly recorded this video of @mtgreenee hinting at using guns to shoot door-to-door vaccinators at an event in Alabama recently pic.twitter.com/cjmUJ8UWI9

"Well, Joe Biden wants to come talk to you guys. He's going to be sending one of his police state friends to your front door to knock on the door, take down your name, your address, your family members’ names, your phone numbers, your cellphone numbers, probably ask for your Social Security number, and whether you’ve taken the vaccine or not. What they don’t know is in the South, we all love our Second Amendment rights, and we’re not real big on strangers showing up on our front door, are we? They might not like the welcome they get.”

So, now we don't just have her publicly suggesting that they shoot a stranger who comes to their door, but also shoot a law enforcement official.

I mean, never mind that a stranger might be a neighbor, Amazon delivering, postal service but to shoot political volunteers or an officer of the law?

TRUMP QUARANTINE LOCKDOWN HAS LITTLE TO DO WITH CORONAVIRUS

I would say at that point, anyone taking that kind of action will be greeted welcoming a death wish of their own and it's not anything a vaccine is going to cure.

With that, we have more of Marjorie's death wish for regular everyday Americans, police officers, and really, for just about anyone who doesn't fall in line with the Trump agenda, which is again, what this is all about.

We've already learned about the group she moderated on Facebook which made death threats against liberals and opponents.

We also remember when the Trump loyalists in Congress, especially House Minority Leader Kevin McCarthy refused to do anything about it when her calls for political violence became a problem earlier this year.

Outside of the vile Representative from Georgia, just as the quarantine began, we had another Republican who volunteered the lives of his own supporters to the coronavirus.

Here's the gist of the quote:

"No one reached out to me and said, 'As a senior citizen, are you willing to take a chance on your survival in exchange for keeping the America that America loves for its children and grandchildren?' And if that is the exchange, I'm all in"

In the original interview, the Lt. Governor admitted that according to CDC guidelines, which he also said we should listen to, he was at risk of dying from the virus due to his age.

Most of his reasoning was due to some fucked up idea of nationalism to protect the American economy.

Generally, that kind of patriotism comes in handy during wartime, but this is a viral outbreak that was killing many people.

In fact, the only reason that he was expressing that kind of patriotism is that Trump was president and that kind of rhetoric fits in well with Trump's America.

At the time, with streets empty and footage of bodies piling up, Trump gaslighting the American people, lying about the coronavirus, the United States spent the better part of the year in darkness.

And that further established the death wish that the Trump loyalists in Congress at both the federal and state level are committed to rain down on all of us.